Last month I profiled Nancy Drew and Carolyn Keene, the pseudonym for the group of authors of the series of detective novels featuring the ingénue detective extraordinaire.  This month, I’ve journeyed to the other end of the spectrum to spotlight Miss Jane Marple, Dame Agatha Christie’s much loved cozy mystery sleuth.

A “cozy” mystery as I had to learn is distinguished from other mysteries and thrillers by an amateur sleuth who solves mostly domestic crimes. The crimes often occur in rural settings and violence and sex are left to the imagination, well, well off stage. Dame Christie is credited with inventing the genre and perfecting it in the character of Miss Marple. The aging crime solver appears in twelve of Ms Christie’s novels that span the period from 1927 to 1976.

While I didn’t use Miss Marple as inspiration for Alicia Blake, the amateur detective and soon to be professional police woman in my upcoming thriller, there are similarities between the two characters. For the most part the two share a reliance on intuition.  Feminine intuition to be exact. The decidedly feminine trait was much used by Christie. In Murder at the Vicarage (1930), Christie compared the skill of intuition to “reading a word without having to spell it out.”

Christie had forty years to hone Miss Marple’s skills, but even at the outset, Miss Marple demonstrated the uncanny ability to take an idle comment from casual conversation and connect the dots, solving crimes that eluded her professional male counterparts. Often, Miss Marple put two and two together while relaxing in a comfortable chair, knitting, or in her garden with a pair of gardening shears in hand. Other times, she stayed in the background and listened while those around her chattered away. From everywhere clues dropped like rain, but only she noticed. And, as every Miss Jane Marple reader knows, if a male character thought he had the crime solved and explained how he believed the impossible unfolded, watch for a roll of Miss Marple’s eyes or a shake of her head. He is inevitably not even close.

In Nemesis (1971), the last Marple novel, Jane had aged. Nevertheless, she was just as much at work as she was in her earlier days. Christie described her as “old fashioned,” prone to taking naps, and with a rheumatic back that prevented her from working in her garden, but she still knits and she still solves a crime. All it took was a glance at the obituaries in her favorite newspaper to spark a memory and, by page two, Miss Marple was off and running, or perhaps, ambling down a lane in St. Mary Mead.

She had “a scent for evil, in the evening of her days, her peculiar gift,” Christie said. 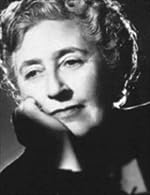 More than 125 years after Miss Christie’s birth, the literary world is re-examining the prolific writer, casting her in a more modern light as a feminist, an identity others claim she would have resist.  Though Christie brought women characters out of the shadows and gave them center stage, they remain in their decidedly female roles, chock full of feminine intuition.

That’s not a bad role model for my own protagonist. Watch for more news about my upcoming thriller, scheduled for release this fall.